Jim D. Hatt: The Search Must Go On 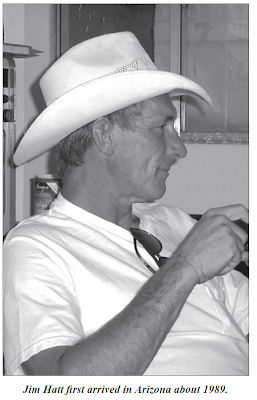 Who was Jim D. Hatt? He was a man devoted to finding gold in the Superstition Wilderness Area and his desire and tenacity equaled that of any man who ever searched for gold there. Hatt was born in Lansing, Michigan on November 30, 1949. He attended school in Lansing, graduating from East Lansing High School in the spring of 1967. Jim married shortly after high school and had three sons. He joined the United States Air Force after his marriage.

Jim eventually moved to Florida and attended Devry College where he acquired his knowledge of Nuclear Engineering and became a radiation health technician in the Nuclear Power field. He worked for a variety of Nuclear Power Plants including Three Mile Island, St. Lucie, and Arizona’s Palo Verde Plant. Three Mile Island was Jim Hatt’s first experience with dangerous levels of radiation from a nuclear source. Jim told me he was involved in the development of a small robot that could be used for clean up in the contaminated areas. It was after all of this he decided to search for gold in the Superstition Mountains.

He first arrived in Arizona about 1989. He worked at Palo Verde Nuclear Power Plant when I first met him. He attended one of my classes on rattlesnakes of the Sonoran Desert in 1992. Jim and I were very close friends for almost twenty years. He shared many of his dreams and expectations with me during that time. We made several trips into the mountains together, but he focused primarily on Tortilla Mountain. Ironically, I understood his obsession with the mountain.

Earl Arthur Hatt, Jim’s great grandfather, told him about the Superstition Mountains and the Dutchman’s lost mine in 1956. Earl Hatt knew members of the Petrasch family personally and heard many stories about the period 1880-1900. This was Jim’s contribution to the Dutchman story.

Jim became very obsessed with the gold of the Superstition Wilderness Area and focused all his resources on the search beginning in 1989. He would take a temporary job such places as Palo Verde, or Ford Proving Grounds, but his search for the old Dutchman’s gold was a full-time avocation. His sometimes caustic and stubborn attitude made him some enemies, however, most of the time he was amiable and friendly. He sometimes stretched the truth or told a story just to get a rise out of people. The best way to tell his story is to let you read excerpts from a letter he wrote to me on March 4, 1995 from St. Lucie, Florida. Jim worked there temporarily on a six-month contract to supplement his grubstake so he could continue his search on Tortilla Mountain.


“Dear Tom: Just a short note to let you know I am alive and well. I used to love the beach, and the sound and smell of the ocean. I don’t know if that love has died or just over powered by the pull of Superstition Mountain and the burning memories I have of my experiences in the SWA. It really was time for me to back off, and see if it was love or lust, I have for the area. As I was on the sugar white sand of the beaches of  Hutchenson Island, I appear content to all that see me, but inside there is a sadness, and words of a great chief echo in my head, 'the mountains, the cactus, the bear and coyote all miss me and wonder when I will return.'

“Tom, I know you think Al Reser and Clay Worst would never tell me any thing of value concerning their beliefs about the location of the mine, but I think they have. After spending three years (1989-1992) on Tortilla, I approached them (one at a time) and disclosed what I had found. I described areas in such detail, and showed photographs of things I had found that convinced them I was one determined individual. They both told me other things in those areas that I missed, which I later verified. Then two days before Thanksgiving 1994, I got a call from Clay inviting me for Thanksgiving dinner. Boy was I shocked to arrive and find Al there. There seems to be a sort of fraternity of individuals who have paid their dues on that mountain. I brought with me, into the Holmes Camp, information from the original Petrasch Camp, that I believe the current Petrasch Camp may not have been aware of it. You at least have never let out anything that leads me to think you are aware of it. But I think you are pretty tight with your secrets! (grin). These things ensure that I will some day be vindicated for my search. There is no way my efforts could ever be looked back on as in vain. I expect to be back this summer to pick up where I left off. Will let you know when I get back. See you this summer. Jim”


The foregoing excerpts from Jim Hatt’s letter allows the reader to realize how devoted he was to searching for the lost gold in the Superstition Mountains and how important it was to be accepted into the Dutch Hunter fraternity. Jim Hatt, like many others, devoted the later part of his life to this search. He was very intelligent, clever and very mechanically inclined.

This letter and several others from Jim Hatt revealed a man with his heart torn between reality and the adventure of searching for lost gold around Tortilla Mountain. So many others have followed this perilous treasure trail through  life and found nothing at the end of the rainbow. He was devoted to the search. He  chose one of the most rugged mountains in the Superstition Wilderness Area to search. He was determined to defend his ideas and opinions to the end. If nothing else, you had to respect him for his dedication and tenacity.

The last time I visited with Jim was at the First Water Trail Head in late July of 2010 during the search for three missing Utah prospectors. Jim had hiked into the Weaver’s Needle area trying to help out. While others remained in the cool of their homes during a very hot summer, there was Jim out looking for clues as to what happened to three lost prospectors. We were all sitting under a mesquite tree in the shade with temperatures around 109 degrees. Jim was coughing quite severely and I noticed blood on his hankerchief. I had no idea he was so ill. Later, after he passed away on Wednesday, October 12, 2011, I learned he had been diagnosed with terminal lung cancer early in the fall of 2009. Jim paid his dues in the mountains; he made his enemies, and also made friends. There were searchers out there that summer who really respected him for his effort.

Jim left behind a sister, Sherry Waller, three sons, and his close friend Doris Abbott. Doris cared for Jim up to the end then he was moved into Mesa to hospice for his last two days of his life.

You might say Jim D. Hatt found his niche in life when he got on the trail of the Lost Dutchman mine.
Posted by Apache Junction Public Library at 10:43 AM