It's Just a Name 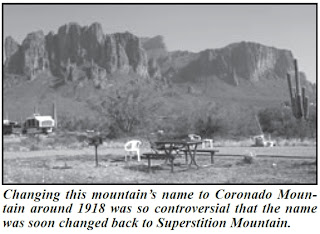 As each decade fades, names of various old landmarks are lost to time. The Bark Ranch in Pinal County is now known as the Quarter Circle U Ranch. The change occurred when William A. Barkley bought the ranch from James Bark in 1907. The old Barkley Camp of the 1930’s at the end of First Water Road is lost forever. For several decades, the camp was known as First Water Ranch. Today, the old Three R’s Ranch was part of the Apacheland property owned and operated by Ed and Sue Birmingham of Gold Canyon. Recently, the Birminghams sold the Apacheland property that included the old Three R’s Ranch. The ranch was obliterated to make way for a new housing development on the old Three R’s Ranch will survive for a few decades on old topographic maps and other old maps of the area.

Another interesting name change in the area was that of Silly Mountain. The mountain along Highway 60 (the Lost Dutchman Gold Route, The Old West Highway, and so forth) was originally called King’s Mountain. It wasn’t named after Julian King, but William N. King, the founder of the Superstition Mountain Ranch Club in Apache Junction in 1934. King owned a small ranch in the area during the late twenties and early thirties. I would imagine  somewhere in the Southwest the old minutes of the Superstition Mountain Ranch Club still survive waiting to be discovered.

One of the oldest named landmarks in the Gold Canyon area is Barkley Hill, but people aren’t familiar with it today. The hill was located almost due south of the old Three R’s Ranch and stone corral. The old mine that belonged to Pearl Bates is probably covered up today. Bates  sold the first 180 acres in the area to Julian King who slowly developed it after 1946 into the King’s Ranch Resort and  then sub-divided. I believe
Black Hawk Road runs along  the east boundary of the subdivision bordering State Trust Land.

One interesting landmark  that remains to this day has only suffered a misspelling rather than total eradication. This misspelling confuses the meaning and the origin of the name. This landmark is Iron Mountain in the southeastern portion of the Superstition Wilderness Area. Iron Mountain was named after a pioneer cattleman Robert A. Irion.

Irion arrived in Arizona Territory in 1876 with a small herd of cattle from Montana. He brought his herd to the area to provide beef for the miners of the Silver King and the Globe mining area. The booming Silver King Mine provided cattle drovers of the period with sufficient opportunity to make a profit with their herds. Robert Irion pioneered the Pinal Ranch (Craig Ranch) halfway between Superior and Miami in the late 1870’s. When Irion passed away the mountain was named after him. The name Irion became distorted by cartographers (mapmakers) near the turn of the century and Iron Mountain began to appear on maps.

Recent arrivals to the region continue to refer to Irion Mountain as Iron Mountain. The advocates, who support  the name Iron Mountain, claim there was a large iron deposit on the mountain that attracts lightning. The iron content of this mountain distorts the needle of a magnetic compass, hence, proof for the name, according to some sources. Today, the name Iron Mountain appears on all U. S. Department of Agriculture maps and U.S.G.S. 71/2” topographic maps of the region. The incorrect name may not mean a lot today, other than the fact it’s just a name.

Researching place names of  old landmarks in and around the Superstition Wilderness Area can be confusing avocation. Names appear to change every generation of so. Another classic change is Flat Iron or Ship Rock on Superstition Mountain immediately east of Apache Junction. Over the years, many hikers have climbed to the Flat Iron or Ship Rock by way of Siphon Draw, immediately east of Mining Camp Restaurant.

Other interesting landmarks in the area include Bull Dog Peak and Goldfield Point. Bull Dog Peak was dynamited in the 1890’s around Christmas time, destroying a large rock that looked like a bulldog. The rock has been gone for over a hundred years, but the name remains with us.

Goldfield Point is the extreme rock edge on the northwestern end of Superstition Mountain. The residents of the gold camp known as Goldfield named the prominent point “Goldfield” in the early 1890’s.

Another interesting name in  our area is the Apache Trail. The sixty-two mile roadway from Mesa to Roosevelt Dam has had several names over the years. The first name was the Tonto Wagon Road, and this was followed by the Roosevelt Road, then the Mesa Roosevelt Haul Road, and, finally, the Apache Trail in 1915. Most historians agree that a ticket salesman name of E.E. Watson coined the term “the Apache Trail.” Watson worked for the Southern Pacific Railroad during the heyday of the “Sunset Limited” and the railroad’s many concessions along its route from Florida to California.
Posted by Apache Junction Public Library at 1:23 PM