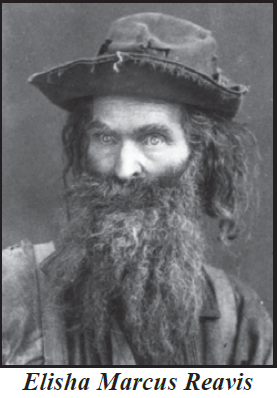 No story about the Superstition Mountains would be complete without a mention of the old hermit. Elisha Marcus Reavis was one of the most enigmatic individuals to wander the West. Reavis was born in Beardstown, Illinois in 1827. He taught school briefly in Illinois after graduating from an Illinois teacher’s college, but soon moved to California where he taught school at El Monti.

Reavis soon lost interest in teaching school and then decided to dedicate his time to the gold fields along the San Gabriel River. He spent most of the 1850’s prospecting for gold. Reavis joined a group of adventurers and prospectors headed for the Bradshaw Mountains in Arizona Territory in early 1863. He had little success in the Bradshaws and returned to California in 1866.

Upon returning to California he married Mary Y. Sexton on December 30, 1867, in San Gabriel. There were two children born to this marriage. One was a daughter named Louisa Maria born on November 22, 1868. There was also a son born to Elisha and Mary, but he did not grow to maturity.

Reavis returned to Arizona Territory shortly after his daughter’s birth. It was the fall of 1869. Elisha’s uncle, Isham Reavis, had just been appointed Assistant Chief Justice of the Territorial Supreme Court. Reavis traveled to La Paz with Isham, but separated from him and traveled on the Vulture City near Wickenburg. He spent enough time in Vulture City to appear on the U.S. Census report for August 20, 1870.

Reavis’ name then appears in the 1872 U.S. Census report in the Fort McDowell area. It is believed Reavis settled on a horse ranch north of Fort McDowell on the Verde River were he broke and trained horses. It is believed he may have rode with the Army as a civilian packer between 1870- 1872. This would explain how he knew the Superstition Mountain region so well and was familiar with the Reavis Valley. He may have served as a temporary Deputy United States Marshall in the McDowell Precinct appointed by his uncle, Assistant Territorial Supreme Court Justice Isham Reavis. Also the 1875 U.S. Census report showed Elisha still living in the Fort McDowell Precinct. The 1880 Great Registry of Maricopa County listed Elisha Marcus Reavis as a resident of the Fort McDowell Precinct. This record may have resulted from Reavis filling out paper work on one of his many visits to the area to sell vegetables from his Superstition Mountain home.

Elisha Reavis was a skilled packer and expert marksman with a rifle. He carried a Winchester 1886 38-40 repeater. There were many stories about his marksmanship and fearless way of life. One of the best stories told about Reavis was the time he defended his abode from ten fierce Apache warriors who were heavily armed. Early in the afternoon of May 8, 1878, warriors tried to get Reavis out of his defensive dugout. Three warriors had lost their lives to the deadly accuracy of Reavis’ rifle. Finally, they decided to go across the creek and camp for the night. Their new plan was to wait until Reavis ran out of food and water. They were in no hurry.

Reavis, while waiting his fate, recalled an old story he had heard about the Apaches from other men who had survived similar situations. If he could convince the Apache he was insane or crazy they might leave him alone. He quickly stripped off all his clothing from his body, grabbed two butcher knives and ran across his garden, then the creek, screaming and showing absolutely no fear. The Apaches heard, then saw the fire red hair and blue eyes of a screeching “white devil” racing toward them in the light of their campfire. The Apaches were convinced he was surely crazy, as no sane man would run naked, armed with two knives, into the camp of seven heavily armed men. The Apaches fled in panic never to return to Reavis’ mountain sanctuary again. The Apaches raided into the area as late as 1881, but avoided Reavis’ valley.

This horrific event in the life Elisha Marcus Reavis certainly represents the overall cunning, daring and selfreliance needed by him to survive in these rugged and  isolated mountains during this period. During the latter years of his life he grew vegetables and sold them around the mining camps that dotted  the central mountain region of Arizona. Reavis was a loner, but did enjoy having an occasional visitor at his mountain dugout. He certainly had the first library of fine books kept within the boundaries of the Superstition Wilderness Area. Reavis became a legend during his life because of his personal appearance, his education, his self-reliance, and his isolated way of life. He never shaved or took a bath. His unkempt appearance undoubtedly added to this legacy. When Reavis arrived in various communities in Arizona Territory he was always riding his favorite burro and leading a string of eight to fifteen burros. These small sure-footed beasts of burden served Reavis well.

The old “Hermit’s” health created a lot of concern among his friends in the fall of 1895. He was close to seventy years old and still making trips from his mountain home to the small towns in central Arizona Territory selling his vegetables. Reavis cultivated and irrigated about fifteen acres of land by himself. He had chickens, turkeys, hogs, burros, two horses and several dogs he cared for. His team pulled a shear plow, disc and leveler. James Dalabaugh often checked in on Reavis at his place in the mountains. Dalabaugh stopped at the ranch on April 9, 1896 for a visit and check on his friend.

Reavis was preparing for a trip to Mesa to buy seed potatoes. Dalabaugh bid Reavis farewell and then checked on some mining property he had in the area and finally ended up at the JF Ranch on May 6, 1896 and found out his old friend had not stopped at the ranch. Dalabaugh back tracked and found the remains of the old hermit just off of Roger’s Canyon in what is known as Grave Canyon today.

He died alone along the trail about four miles south of his mountain home around April 10, 1896. A grave was dug and Reavis’ remains were laid to rest on May 7, 1896. Today the grave can be seen in a small Indian ruin with a pile of stones on it. Twenty years ago the grave had a stone marker, however, it is gone today.
Posted by Apache Junction Public Library at 4:11 PM