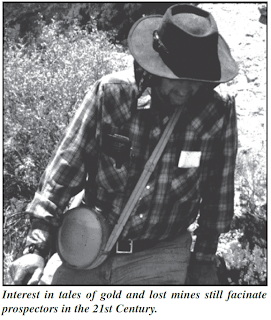 We are now in the twenty-first century, and the intense interest in lost mines in the Superstition Mountain area still prevails.

Men and women continue to come to the Superstition Wilderness Area hoping to find their fortunes. Most find nothing and some are lucky to just walk away. Sadly, some make poor choices and eventually end up dead or injured. These accidents are no stranger to the unprepared and inexperienced in this rugged mountain range east of Apache Junction. Adventurers and prospectors have suffered from extreme weather conditions, gunshot wounds, falls, flash floods, dehydration, and sun stroke to name a few. Ironically, the Superstition Mountains are far safer than the streets of Phoenix or the highways of Arizona.

Since the early 1880’s, men and women have searched these rugged mountains for lost mines and treasure. Gold is the natural magnet that attracts the modern day adventurer to these mountains. The most significant lost mine story centers around a German immigrant name Jacob Waltz. His infamous mine was allegedly located with a two-mile radius of Weaver’s Needle, a prominent landmark east of Superstition Mountain.

Each year, I am amazed at the people who become interested in the search for the Lost Dutchman mine. There is a continuous list of new prospectors who are searching these rugged mountains for clues. Several years ago a businessman and prospector named Joe Ribaudo, of Lake Havasu, Arizona, decided he wanted to see the Dutchman’s legend carried on by some kind of annual gathering. He came up with the idea of the “Dutch Hunter’s Rendezvous.” He held the first “gathering” just west of Twin Buttes along the Gila River east of Florence, Arizona.

This first “Dutch Hunter’s Rendezvous” was small with only thirteen people attending in October of 2005. However, there was a lot of enthusiasm for the idea. The next year the rendezvous was moved to the Don’s Camp with the help of Don’s member Greg Davis. The camp is located at the base of Superstition Mountain near the Peralta Trail Head. Each year the activity has been held toward the end of October and has continued to grow. It is a gathering of individuals that are extremely interested in the Superstition Mountains and stories about lost gold mines. This event has attracted old timers, as well as contemporaries, anxious to learn new stories about the Superstition Mountains.

The third year, Joe handed over the organizing of the “Dutchman’s Rendezvous” to Wayne Tuttle and Randy Wright. Greg Davis continued to make the arrangements for the Don’s Camp for the annual rendezvous. Joe and his wife, Carolyn, remained being camp hosts providing some shade and cold water. The scheduled activities include a variety of options for attendees. Friday includes sitting around various campfires and telling stories about the mountains and the many characters that searched for gold there. There are usually two hikes Saturday morning. One is a very difficult hike over rough terrain and the other hike is over much easier terrain and gentler slopes. After dark on Saturday evening everyone gathers at the Ramada
to listen to a couple of guest speakers.

I attended last year for the first time and I thought it was an excellent opportunity to meet a variety of people from all over the United States who are interested in our local history of the mountains. This particular event is not connected with the Apache Junction Chamber of Commerce or the Superstition Mountain Museum. Last year there were three days of events. The interested, the curious, and the very serious showed up for the events last year. They traveled from such distant places as Oregon, Oklahoma, Texas, California, New Hampshire, and other states. The organizers of this event should be proud of their accomplishment. I would estimate approximately a hundred people attended last year’s “Dutch Hunter’s Rendezvous.” The event is growing each year.

Each year, noted Dutch hunters, historians, and authors attend this gathering. Many of the authors have published books on the history of the area. Over the years Clay Worst, Bob Corbin, Jack San Felice, Bob Schoose, Gregory Davis and Dr. Thomas Glover have attended the event and added their signature to it.

The “Dutch Hunter’s Rendezvous” is an open event, so everyone is welcome. This year’s event is scheduled for Fri., Sat., and Sun., October 21, 22, & 23, 2011. There is no admission, no charge for camping, and all activities are free, based on first come, first served. The camping is primitive, so you need to bring what you need to be comfortable. Be sure to bring water, food, tent and bedding. If you don’t bring a tent you will have to sleep outside or in your vehicle. There is no electricity or running water. There are restroom facilities.

For more information you may email Joe at havasho@ frontiernet.net or Randy at Djui5@Yahoo.com
Posted by Apache Junction Public Library at 6:00 AM