It was late May of 1936, when John Hallberg and his partner, Charles Williams made there way to Apache Junction. They staggered into the Apache Junction Inn to see their old friend George Curtis. Both men were somewhat ravished from the desert sun. Their skin was tanned darkly and dried. You could tell by looking at them they had spent considerable time working in the hot desert sun. The men told an incredible story to Curtis, the proprietor of the Apache Junction Inn. They told Curtis about a gold discovery they made in the mountains. The men were carrying a very worn and tattered sack with a large rock in and a few small ones. Both men claimed they had discovered a rich gold deposit. Curtis, a man experienced with identifying gold, asked to look at their sample. Curtis had also done quite a bit of prospecting himself and was aware of rocks and valuable minerals. He said he could identify gold without any problem.


Hallberg and Williams removed the rock from the bag and several small pieces. Curtis suggested they weigh the rock on the kitchen scales. The rock weighted thirteen pounds and the smaller pieces seven pounds. The rocks were composed of Quartz, Mudstone, and free Gold. Curtis estimated, considering the amount of gold in the specimen to be worth about $7,000 and the other smaller pieces about $3,000. He told both men they had about $10,000 in gold of course this was based on the current price of gold at approximately $35 a Troy ounce.

From this point on the story really gets interesting. The newspapers basically carry this portion of the story and the gold discovery in 1936 by John Hallberg and Charles Williams. At first it was speculated they had found the Dutchman’s Lost Mine, but both denied it was the Dutchman’s mine or remotely associated with it. John Hallberg was a prospector of reputation who had prospected the area since 1919. Many people of the period respected his opinion and his word. 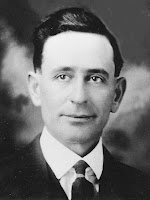 However, Charles William’s reputation was more of a problem. He was a World War I Veteran who claimed he discovered gold in a cave in the Superstition Mountains in January of 1935, but became disoriented and wandered around the Superstition Mountains for several days before walking out to safety. The sheriff of Maricopa had organized a search for Charles Williams when he walked into one of their camps with a pocket full of nuggets. Eventually William’s gold was proven to be Jeweler’s gold and not natural gold. The U.S. Government confiscated all of William’s gold. Actually he was lucky he did [not] go to jail. After the adjudication of William’s case he lost the gold he claimed was his. The U.S. Government proved it was stolen gold. Some believe, including William’s wife, that he was an innocent prospector involved in some kind of crooked scheme. Whatever the case, Williams never went to jail nor did he get the gold that he found.

John Hallberg claimed he didn’t know Williams was involved in that case when they had become prospecting partners. I suppose John didn’t know much about Charles Williams when he took him on as a partner. The following information I read from a personal journal dated from this period. Again this is for what it is worth and I certainly don’t know if it is fact, however it makes an interesting closure to the story.

The “Hallberg” conglomerate, as it became to be known, is explained like this. The source of this thirteen pound stone illustrates gold can be found anywhere. According to the journal the conglomerate of gold was found in a wash flowing off the side of Superstition Mountain below the old Silverlock and Malm’s claims. This could make sense if this area was known for gold. It was always George Curtis’s conviction the stone came from the northern end of the Goldfield Mining area. There are so many different kinds of formations in this area that might be conducive to gold. However, Curtis believed Hallberg and Williams picked the sample up on somebody else’s mining claim and just walked off silently with nobody else being the wiser. Free placer gold has been known through out this entire area. I have worked fine placer gold in the extreme north end of the region. One must realize that free gold is where you find it. Some times the source can be very difficult to determine. Many a gold rush has been started with placer gold and no known source. Sometimes the source is completely eroded away and nothing remains of it.
Posted by Apache Junction Public Library at 4:00 AM