Goldfield and the famous Mammoth Mine have long ceased to be the booming mining camp they were at the turn of the Twentieth Century. The inhabitants have left and little remains today of its glorious past. Remnants of this era can be found on the base of a large alluvial fan. This alluvia fan protrudes into the desert far below the towering cliffs of Superstition Mountain.

Late in the Nineteenth Century, early prospectors passed this area without much of a glance. Mexican prospectors found small stringers of gold in the area as early as 1879. However these outcrops did not attract any serious interest. Eventually some Mormons from Mesa City began to prospect in the area. The Lucky Boy claim was staked in 1881, but produced very little gold. William Kimball staked out the Boulder-Buckhorn in 1886. On November 27, 1892 C. R. Hakes, Orlando Merrill, Orrin Merrill and J. R. Morse filed on the Black Queen claim. The Black Queen produced a reasonable amount of gold and it kept miners busy in the area until the discovery of the Mammoth claim in April, 1893. This discovery was prompted by a flash flood along Goldfield Wash (Weeks Wash) that exposed a rich vein of gold ore.

Hakes, the Merrills and Morse worked their claim for a short time then filed four other claims; the Black King, Mammoth, Mother Hubbard, and Tom Thumb. They sold their claims to Denver capitalists Denny Sullivan and Charles I. Hall just six months after filing the claims. They sold the claim for the price of twenty thousand dollars.

It was the Mammoth that became the bonanza of the five claims. At first there was only a small amount of gold detected at the surface, however at the depth of sixty feet a large ore deposit was located that later became known as the “Mormon Stope.” Between seventy and two hundred and fifty feet the gold was so rich it held the quartz together in the stamp mill making it difficult to separate. It is claimed that over three million dollars in gold was removed from this mine in four years between 1893-1897.  Most of the gold was removed from the Mormon Stope in the first two and a half years with aid of a twenty-stamp mill. 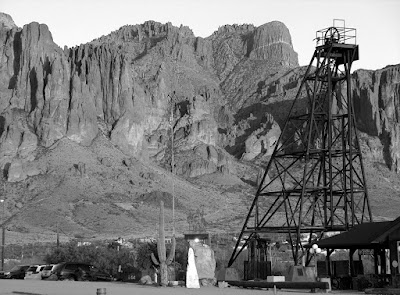 Geologically this area is a basement pediment complex composed of coarse grained, indurated conglomorates and altered granite breccia. Rich veins of gold in quartz intruded the granitic material. The principle ore body, the Mormon Stope, was located in the vicinity of two northward striking and steeply westward dipping faults that outcropped some three hundred feet apart. Within this zone the richest ore was produced, resulting from granite outcrops heavily stained with brownish limonite containing irregular stringers rich gold-filled quartz. According to George B. Church, the material mined was oxidized. The Iron Pyrite that accompanied the quartz was the source material for the gold bearing Iron Oxide. Some minerals today that have been associated with the gold quartz were Monzanite, and Calcite.

By November, 1893, the hostile desert environment had been altered so that it was compatible for occupancy by miners and their families. Frame structures and tents were commonplace. However, Goldfield was doomed from the beginning. The miners were digging rich gold ore one day and the next day the gold ore was gone. The rich ore body had been dissected by a fault millions of years before. The rich ore body had attracted well over five hundred people to the area. By November, 1897, Goldfield became a ghost town haunted only by the wind and the coyotes.

Early in 1910 Goldfield briefly came to life again. George U. Young acquired the claims and for the next fifteen years tried to relocate the lost ore body. At 900 feet low-grade ore was encountered, however this attempt ended in failure because they didn’t locate the high-grade ore deposit. It was at this time a large steam-driven electric power plant was installed. The purpose of the power plant was to operate a ten-stamp amalgamation mill and provide power for a 50-ton cyanide plant. The two were operated intermittently for several years producing about $67,000 worth of gold and silver.

On June 8, 1921, Goldfield was re-established as Youngsberg, Arizona. After the closing of the post office in Goldfield (Youngsberg) in 1926 the community ceased to exist officially. The area saw mining activity in 1949, and then through much of the 1970s. During both of these periods gold was produced. Only sturdy concrete foundations and eroded mine dumps exist from the early days of mining in this area.

In 1985 Goldfield had a rebirth when Robert and LuAnn Schoose decided to fulfill a dream and build a ghost town that would serve as both tourist attraction and a museum. The site of Goldfield and Youngsberg are once again a place to go see.

Schoose’s effort has definitely help preserved the mining history of the area and Arizona. His ghost town has one the finest display of old mining equipment in Arizona.

Take the time to drive up the Apache Trail (SR88) four miles northeast of Apache Junction and visit the Goldfield Ghost Town. This site is a fun place to visit and learn about mining in the American Southwest. This modern theme town is located south of the old Mammoth mine.
Posted by Apache Junction Public Library at 5:00 AM