Coatimundis in the Superstitions

Recently, while driving along Highway 260 to Workman Creek, we spotted a strange looking solitary mammal crossing the road with a long erect tail. This was near Rose Creek Divide. The animal was brown with a white and brownish face. It had a long pointed snout. We recognized it as a coatimundi.

We were surprised to see 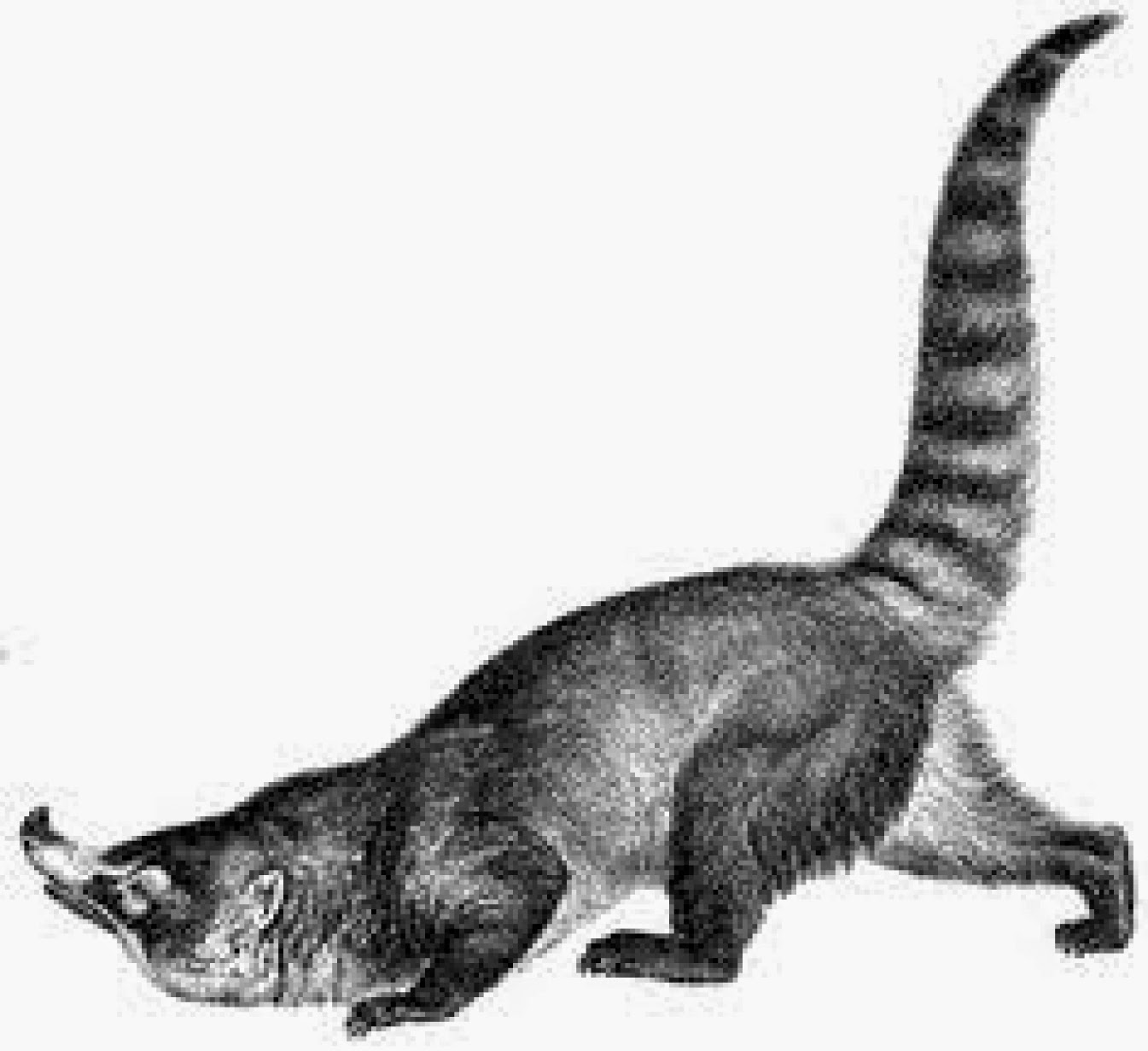 a coatimundi this far north in Arizona. After a little research and a few questions I found that coatimundi have been spotted in many parts of the Central Mountain region of Arizona. We have also heard of a few coatimundi sightings in the Superstition Wilderness Area by horseman and hikers. A hundred years ago coatimundis were not commonly reported in Arizona.

The coatimundi (Nasua Narica) that is common to Arizona is an omnivore similar to a raccoon. The raccoon, ringtail cat and coatimundi all belong to the Procyonid family. They have a long turned-up snout and a very long tail. The long snout is white near the tip. They also have white on their face near the eyes. Coatimundis have dark feet, small ears, and a long thin tail. The tail is about two feet long on adult males with six or seven strips.

The mammal has an insatiable appetite for fruit, grubs, small animals, lizards, and amphibians. They usually travel in large groups of 6 to 24 animals. These groups are known as "bands." The bands usually carry their tails erect and are always chattering. The mammal has a brown coat and grows to 30-35 inches long and 8-12 inches high at the shoulders. They can weight between 10-30 pounds. Males are almost double the size of females. The coati mate in early spring and have a litter of 4-6 pups, as their young are called. Their gestation period is about eleven weeks. The female raises, feeds, and educates the young. The females usually choose a rocky den in a brushy area near water.

When you see just one coatimundi it is usually a solitary male. The females and offspring that form "bands" don’t allow males in the group except during mating time in the spring. The males live a solitary life for the most part.

Coatimundis are generally diurnal, meaning they spend most of their time searching for food. They are very fond of fruit. They like the fruit of the Manzanita and other similar plants. The Coati will also eat the fruit of the Prickly Pear cactus. The coatimundi does very well in the desert woodlands north of the U.S.- Mexican border.

Most states allow coatimundis as pets, however Arizona does not. Arizona regulations consider the mammals wildlife. Therefore the laws of Arizona prohibit the possession of live coatimundis. However, coatimundi can be hunted year-round in some parts Arizona. The bag limit is one animal.

These interesting mammals are being seen more frequently every year around in the Superstition Wilderness Area.
Posted by Apache Junction Public Library at 9:56 AM