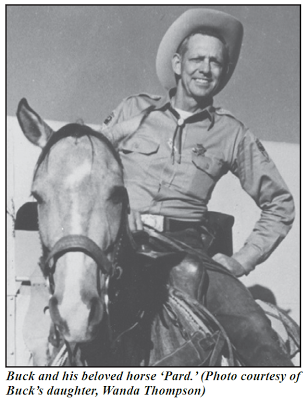 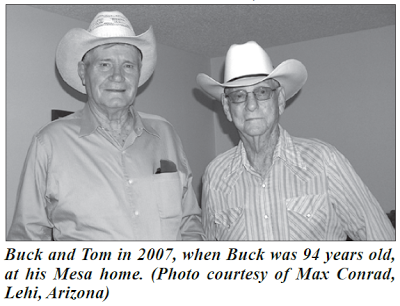 Many years ago when I worked on the old Quarter Circle U Ranch in Pinal County I heard many a wild yarn. The storytellers would occasionally gather on the porch of the old bunkhouse on a hot summer evenings and the tall tales would begin. Usually the group was a mixture of cowboys, prospectors and sometimes an occasional deputy sheriff, brand inspector or game warden.

One hot July evening Bill Finch, the state brand inspector showed up about sundown. He wanted to throw his bedroll down and spend the night on the porch. Bill always had his guitar with him to serenade himself, the cattle and his horse. This particular night Buck Wallace, state game warden, was also spending the night. Buck also packed a guitar and a harmonica. Added to the group that night was also an old prospector named Joe Roider who played the spoons. Now add a cowboy and a greenhorn to this mixture and you really had a tall story brew.

The Black gnats and mosquitoes were biting and aggravating everyone. We put out a smoke pot filled with some kind of insect repellent that discouraged the insects a little, but just about suffocated us. I would guess it was about 98 degrees that evening as we sat singing and talking about the Old West and lost gold mines. Today, I believe I am the only survivor of that group. It was certainly one of those unforgettable evenings considering the circumstances.

As I recall the moon was full, and coyotes were howling, Bill Finch was singing “the Streets of Laredo,” Joe was playing the spoons, Buck was playing his guitar and harmonica and the rest of us were singing along. The night slowly began to fade away as the Coyotes howled and serenaded us.

I remember the group giving their opinions as to whether or not the old Dutchman’s mine existed and if it did— where? Then there was a story about a dead elk in the back of a pickup with mule shoes on it. As it turned out some dude hunter shot a mule thinking it was a cow elk. This discussion continued into the early hours of morning, never being any real agreement. When the disagreements got out of hand Bill Finch would start another song and play his guitar. Rather than argue everyone would join in playing and singing along with Bill Finch.

This was my first introduction to Garland Ellsworth “Buck” Wallace. Buck was a kind of man who was always on duty. It was after this get together Buck and I got acquainted. We made several rides together that winter into the Superstition Mountains.

Buck and I had spent several different occasions riding the mountains when the weather cooperated and sometimes when he was checking in on all the hunting and prospecting camps. I knew what Buck was looking for and I rode along with him. My boss wanted to be sure nobody was rustling any of his cattle and he encouraged my participation with Buck. I always enjoyed talking to this man. He was dedicated to enforcing the game laws in Arizona and preventing poaching. Buck in many ways was one of the few men I met that maintained my belief in the sliver screen cowboys that were heroes as a child. He was tall and slim and always clean cut. He wore a Stetson, Levis, pearl button Western shirts, always had his belt on that had his name “Buck” carved in it and of course cowboy boots. He always challenged me to do better in life. At the time all I wanted to do was become a good cowboy.

Whenever Buck visited the ranch I just volunteered to open our Serval refrigerator and freezer and let him have a look. The truth was I preferred beef instead of venison any day and Barkley always had plenty of beef on hand for us to eat.

On one beautiful day Buck and I rode over to Piper’s Camp at the base of Weaver’s Needle. I rode into camp ahead of Buck and greeted everyone. Buck would visit with the individuals in camp and look around. After his inspection we rode on to the next camp. This particular day Buck and I checked out four camps. All of our stops were peaceful in nature and we had no problems. After inspecting the camps we made our way back to the Quarter Circle U Ranch.

I will never forget how proud Buck was of his one-eyed Buckskin horse named Pard. Buck would tell me there was nothing Pard couldn’t do with one eye that a horse with two eyes could do. One day he talked me into a short horse race to show Pard’s  ability. Another time he told me how Pard saved his life in a pinch. A limb had knocked him out of the saddle and he was hanging over a cliff hung up in his rope on the side of his horse. Pard stood perfectly still until he was able cut the rope with his boot knife and free his leg.

The stories on the porch that night about the mountains and prospectors reminded me of what life had been like being associated with this mountain and those who called it home. Calling the mountain home was like calling it a special place to visit and regain one’s composure and continue on with life. That night on the porch of the old Quarter Circle U Ranch we recharged everyone’s mind about what was real and what was legendary. Buck Wallace, Bill Finch, Joe Rodier, and Mike Finley were real people in a world of pretenders. The spirit of the West lives in the memories of men like Garland Ellsworth “Buck” Wallace and old Bill Finch. I am a better person for have knowing them both.

Buck Wallace passed away August 8, 2012 at the age of 99. He was a Navy Seabee during World War II. He had worked for the Arizona Fish and Game Department as a warden for twenty years. He was a life long member of the Masonic Temple. Buck was a good man and he believed in helping others. I was proud to have known and ridden with him in the Superstition Mountains back in the late 1950’s. I had found one of my silver screen heroes in Buck Wallace. He was one of those heroes who represented ethics, honesty, integrity, respect and compassion. Today, my friends, we need more people like Buck Wallace.
Posted by Apache Junction Public Library at 9:29 AM