There are three “King” names in the Gold Canyon area. A couple of names have been long forgotten, but sometimes we need to be reminded of the past and a little local history.

King’s Mountain, King’s Way and Kings Ranch Road are three names of landmarks in the area, however only one name has survived until today. 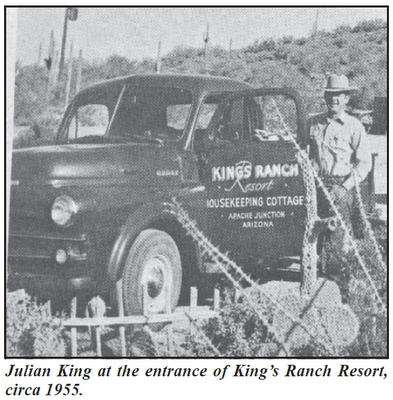 When Julian and Lucy King first arrived in the foothills of Superstition Mountain in December, 1945, they had a dream to build a guest ranch and resort. They purchased land from a wiry old character named Pearl Bates and went about creating their dream on raw desert land. Julian and Lucy hauled water for a long time before developing a well. They were neighbors of the Barkleys who had lived in the area since 1907.

The road that meandered across the desert from U.S. Highway 60 to the Barkley’s Three R’s Ranch was merely a primitive set of tracks that was seldom maintained. Julian and Lucy King extended the road from the Three R’s Ranch to their property about a half-mile. If you are “new” to the area and don’t recall the old Three R’s Ranch it was located near the site of the legendary Apacheland Movie Studios owned and operated by Ed and Sue Birmingham until Valentine’s Day 2004 when it was destroyed by fire. The old ranch house was constructed of native stone and stood for more than 50 years.

Julian and Lucy King made every attempt to promote their property and business. A sign constructed out of 4 x 8 piece of plywood was erected near U.S. Highway 60 announcing to the world the King’s Ranch Resort at the base of Superstition Mountain. The road from U.S. Highway 60 to the King’s Ranch and Guest Re sort soon became known as Kings Ranch Road. The first time I remember going over the road was in 1948 when my dad and I visited old Gus Barkley at his home.

I don’t remember Julian’s sign being on Highway 60 at the time. However it was there in 1952. The first time I worked for the Barkley Cattle Company in 1955 Kings Ranch Road had been well established.

In recent years I have heard comments about why the county named a major road after the Kings Ranch and Guest Resort. I don’t find the naming of a road after a pioneering entrepreneur such as Julian King unusual or different.

Some have wondered why the road wasn’t named after the Barkley Cattle Company. After all, William A. “Gus” Barkley had been working a ranch in this area since 1907. Barkley probably could care less about a road being named after him as long as somebody maintained it. According to many who knew the Kings they spent many hours working on the road from their place to U.S. Highway 60. I am sure this pleased Gus Barkley.

After Julian King’s death in 1972, I learned many things about this man and I found him in an entirely new perspective.

The ships of that task force turned the tide of World War II in the Pacific. For Julian’s part as a flight deck officer launching airplanes against the Japanese Navy and the final sinking of four Japanese carriers is reason enough for the road from his old ranch to U.S. Highway 60 to always bear his name.

Another interesting name change in our area is that of Silly Mountain. Originally this mountain was named King’s Mountain, but not after Julian M. King. It was named after William N. King, an owner of a small ranch near the base of the mountain in 1934. William N. King was the founder of the Superstition Mountain Ranch Club at the Apache Junction Inn in 1934. The club was active for about seven years. After the
World War II the club never started up again.

There are several stories as to how Silly Mountain got its name. There are those who believe it originated from a small girl continuously calling the peak a “silly looking mountain.” Whatever the source of the mountain’s name, the name Silly Mountain stuck.

Recently Rosemary Shearer of Gold Canyon indicated the mountain may have had another name. She suggested it might have been called Tonto Mountain at one time. I believe Tonto means “fool” in Apache or at least one of the Native American languages in our area.

Speaking of Native American sites, one of the most misnamed landmarks is Hieroglyphic Canyon. Originally on early maps this site was known as Apache Springs.

Ironically, I was told by Barkley this site’s name was changed by Julian King because it sounded a bit more international then Apache Springs. I believe Julian had a relative living out here that was associated with Howard Carter in 1924. As I recall it was Mrs. Lansing.

Carter is the Englishman who discovered King Tut’s Tomb in Egypt.

It is interesting how place names come about. Many years ago there was another landmark named after a King and that was King’s Way what is known today as Blackhawk Road or Drive. At one time this road was the route to Julian and Lucy King’s house on a small hill at the end of the road. Again I was told there were no Blackhawk Native Americans in this area.

Two of the King names can be accredited to Julian and Lucy King and their guest ranch and resort. They were pioneers in this area when it was really tough to survive during the hot summer months. Eventually Julian and Lucy left the area and traveled over to Catalina Island where they managed a hotel in the summer time. A Pacific island was much cooler than the Sonoran Desert of Central Arizona.

I must admit each time I drive down Kings Ranch Road I think of Julian and Lucy King and their guest ranch and resort. Their hospitality and storytelling was a wonderful part of the history of this area fifty years ago.

So many place names in this area have been lost forever and will probably never be revived. Place name changing from generation to generation is the legacy of human occupancy. I suppose this is what you call progress.
Posted by Apache Junction Public Library at 1:53 PM