Rick Gwynne: Searching for the Truth 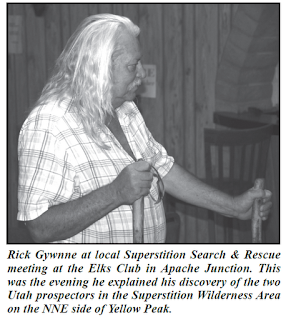 Richard “Rick” Gwynne is a man who believes in his own convictions. He has the tenacity of a bulldog when it comes to searching for something he believes in.

Rick has been searching for the lost gold of Superstition Mountain for the past three decades. I first met Rick in 1983 at the old DeCook Cabin near Peralta Road. At the time he was helping Bob Ward manage and care for some mining property. I could tell that Rick was very interested in the Superstition Mountains and all the different stories. Rick matured into an individual who knew what he wanted in life and he worked for it. However, always in the back of his mind he was thinking about the gold of Superstition Mountain and was convinced he could figure out the riddle that so many had failed to do.

Rick Gwynne was born in Battle Creek, Mich., in 1950, but left home when he was 13 years old. He attended high school in St. Petersburg, Fla. In the late 1970s he worked as a volunteer fireman for the Busnell Fire Department in Busnell, Florida. He came to Arizona with his future wife, Georgana in 1983. Preacher Don Deming married them in the foothills of the Superstition Mountains in 1987. Rick has six children. Richard and Joseph live in Florida. Jeremy, Will Garrett, Sarah Ann and Kayla live in Arizona. Rick also has seven grandchildren. Rick has always cared for his family first and treasure hunting was second in the “scheme of things.”

The Superstition Wilderness Area and the many gold stories attributed to the region continues to attract men like Rick Gwynne who believe they will find a golden bonanza within its realm. Many publications tell stories about lost gold and give clues as to where this gold is allegedly hidden. Many follow the stories associated with the Peralta stone maps. These stones continue to attract people who apparently love to follow clues from an unknown source. Men and women have been trying to interpret the stone maps since 1950. None of these searchers have found any clues really worthwhile. Nobody has produced any real gold associated with these stone maps.

Early in June of 2010, three men from Utah decided to search for the gold of Superstition Mountain. They were convinced they could find it. They had read and studied Jim Wilson’s book, “To Crack A Golden Egg.” Most of their clues had come from Wilson’s book. The book led these three men to a place called Yellow Peak just beyond Black Mesa Ridge some 2 miles east of First Water Trail Head. Even today there
is no precise agreement as to how these three men hiked into the area. They apparently felt they did not need to carry much water. They each carried about a liter of water in a plastic container, a couple of umbrellas, and a battery-powered lantern.

The men knew the sun posed a threat. Their well-being was dependent on the umbrellas and the little water they had in their possession. These men literally vanished from the face of the Earth around June 6, 2010. The Maricopa County Sheriff’s Mountain Rescue Team mounted a seven-day rescue effort commencing on June 11, 2010, that included helicopters. Eventually the official search was called off on June 18, 2010, and then volunteers became involved in search for these men. Still there was no trace of these men as of Jan. 1, 2011. Speculation as to what happen to these three men ran high.

Rick Gwynne began his search for gold in earnest with his partner “Tin Cup” Gayle “Bob” Wagner. For the next twenty years they searched the canyons, mountaintops and ridges of the wilderness for clues. Rick continues the search to this day. Rick has suffered from a bad hip in recent years which has curtailed his activities, but not his spirit. He learned in 2010 that he needed surgery to help him with his hip problem.

Toward the end of October 2010, Rick attended the Dutch Hunter’s Rendezvous at Dons’ Camp and learned more details about the three missing Utah prospectors. Shortly after the first of the year in 2011 he decided to take one last trip into the mountains before he had surgery on his hip. He departed First Water on Monday, Jan. 3, 2011 and hiked toward Garden Valley and the Yellow Peak. Rick always believed James Wilson had some good information in his book titled “Cracking the Golden Egg.”

Rick, taking his time, hiked two and one-fourth miles in two days over extremely rough country. He was slowly making his way around the side of Yellow Peak when he made a gruesome discovery. Looking down, he spotted two fully clothed skeletons, lying on black basaltic rock scree out in the open. These unfortunate individuals had carried umbrellas to protect themselves from the rays of the hot June sun, but not enough water to survive.

Rick was convinced he had found the remains of two of the Utah prospectors reported missing June 6, 2010. He reported his find to the Maricopa County Sheriff’s Office and the two bodies were recovered on Wednesday, Jan. 5, 2011, almost seven months from the time they were reported missing.

Rick Gwynne’s discovery ended the search for two of the missing Utah prospectors. The remaining prospector was found a half-a-mile away from the first two by the Superstition Mountain Search and Rescue team a week later. This final discovery ended the search for the three Utah prospectors. This prospecting trip Rick Gwynne will never forget as long as he lives. His search for the truth in these hills revealed a tragic end for the dreams of others.

This tragic incident should be a warning to people who believe they can manage the extremes of the summer heat in the Sonoran Desert unprepared. In the end it took a prospector like Rick Gwynne with the knowledge of the back country and the habits of prospectors to finally locate these missing men.

Richard Gwynne and Phil Rhinehart published a book titled: “In Search Of The Heart.”
Posted by Apache Junction Public Library at 6:00 AM