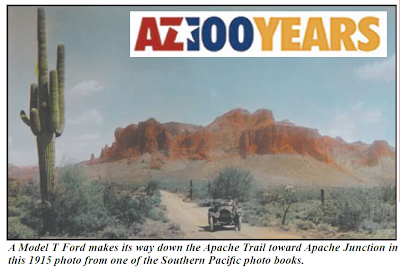 Arizona will be celebrating its centennial on February 14, 2012. The 48th Annual Lost Dutchman Days, Feb. 24-26, will honor the statewide celebration of Arizona’s 100th birthday by featuring a President Theodore Roosevelt reenactor as the Grand Marshall for the annual Lost Dutchman Days Parade (Feb. 25). After the parade he will drive to locations on the historic Apache Trail to speak about the building of the road to carry materials for the construction of the Roosevelt Dam.

This column is the second in a special centennial series about Arizona.

There is nothing more Arizona than the story of the Apache Trail and the challenges to build it between 1903-1905. This roadway was at the center of one of the first major efforts to promote Arizona and it beautiful climate by the Southern Pacific Railroad between 1915-1927. There are many stories about Arizona, however, Arizona history would be incomplete without this story.

The Apache Trail can certainly be classified as one of the most adventurous and scenic routes in the American Southwest. Since 1906, tourists have traveled this unique mountain road and marveled at some of the most spectacular scenery in our state. The Apache Trail originally began in Phoenix and terminated at Roosevelt Dam. The most significant portion of roadway began at the Mesa railhead and terminated at Roosevelt Dam site on the Salt River some 62 miles away.

The approximate route of the Apache Trail has served humanity for more than a millennium. The Salado people used the trail to penetrate the Salt River Valley around 900 A.D. Other Native American groups continued to use the trail as a migratory route between their winter homes on the desert lowlands and their summer homes in the mountains along the Mogollon Rim.

The Apaches and Yavapais used the trail for their predatory raids against the Pimas along the Salt and Gila Rivers south and west of Superstition Mountain. The Apaches and Yavapais continued their raids after the arrival of the Anglo-Americans in the early  850’s. Finally in 1864, Camp McDowell was established along the Verde River some four miles north of the Salt River. The Pimas became willing allies of the blue-shirted soldiers who manned Fort McDowell. This footpath (trail) along the Salt River through the mountains to Tonto Basin was called both the Tonto Trail and the Yavapai Trail on different occasions. The Army quelled the predatory ways of the Apaches-Yavapais in this region by 1868. There were other military campaigns fought against renegade Apaches from 1871 until Geronimo’s surrender in 1886 at Skeleton Canyon in Southern Arizona.

A young man navigated the Salt River near the present site of Roosevelt Dam to Phoenix in a cataract boat during the early part of the 1880’s. He reported numerous ideal dam sites along the river’s course. The Maricopa County Board of Supervisors ordered a feasibility study done on the Salt River for possible water storage and flood control dam sites shortly thereafter. William “Billy” Breakenridge, James H. McClintock, and John H. Norton conducted a feasibility study for the county board of supervisors. Breakenridge also explored the route for a possible wagon road at the time of this study. Billy Breakenridge was a well-known Tombstone lawman during the 1880’s and James McClintock became Arizona’s first official historian.

Breakenridge’s report was highly favored for the construction of a dam just downstream from the confluence of Tonto Creek and the Salt River. The Congress of the United States authorized the construction of a dam and the project was funded in March of 1903. The task of supervising the building of this dam was given to the newly-formed U.S. Bureau of Reclamation Service under the United States Department of Interior. This was one of the first major building projects in America shortly after the beginning of the 20th Century. 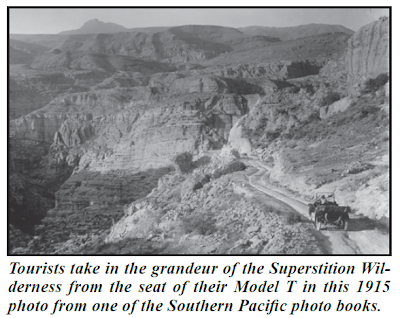 Actual construction of the Tonto Wagon Road, as it was known in the beginning, began on August 29, 1903, with two hundred Apache laborers working just below the dam site on the Salt River. Another work camp was established on November 11, 1903, at Government Well, some twentyfive miles from Mesa, employing some 200 Pima laborers. The Tonto Wagon Road was completed on September 3, 1905, at a cost of $551,000. The road was sixty-two miles long, running from the Tonto Dam site to the Mesa railhead. It was reported more than a million and half pounds of freight moved over the road in its first month of operation. By 1912, the year of Arizona statehood, Roosevelt Dam was completed and supplying water and hydroelectric power to the Salt River Valley and the mines at Globe.

The Apache Trail (State Route 88) was officially dedicated as Arizona’s first historic highway on February 25, 1987, at Lost Dutchman State Park. Tourists have been traveling the Apache Trail since 1906, enjoying one of the most beautiful desert highways in America.

The Apache Trail is truly a roadway to adventure, beauty and history. President Theodore Roosevelt was given credit for the following words about the Apache Trail. “The Apache Trail combines the grandeur of the Alps, the glory of the Rockies, the magnificence of the Grand Canyon and then adds an indefinable something that none of the others have to me, it is most awe-inspiring and most sublimely beautiful.”
Posted by Apache Junction Public Library at 7:30 AM