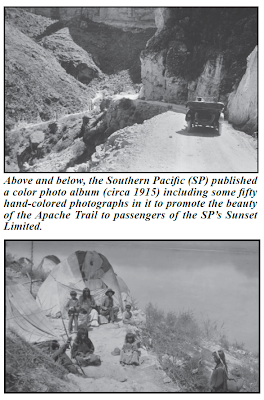 As early as 1910, while in its infancy, Hollywood recognized the potential of the Apache Trail and area around Roosevelt Dam for filming. The Southern Pacific Railroad promoted the beauty and vastness of the area as early as 1915. The Southern Pacific (SP) published a color photo album with some fifty handcolored photographs in it to promote the beauty of the Apache Trail to passengers of the SP’s Sunset Limited.

These black and white images were sent away to Switzerland to be hand-colored and toned. The final product was vibrant and vividly hand-colored photographs. The beauty and isolation of Roosevelt Dam, and the rugged Apache Trail was revealed in photographs and films of the period. The Southern Pacific had captured the essence of this new frontier.

The building of Roosevelt Dam between 1903-1911 was one of the most photographed and publicized events at the turn of the century in America. The fledging movie industry took notice to this region for on-site  filming. Several silent films had been shot along the Apache Trail prior to 1925. These films included some early Tom Mix silent movies and other well-known actors. Film location managers found Mormon Flat one of the most spectacular areas to film in. Today, this site impounds Canyon Lake. The introduction of talking movies ended the long run of silent films.

A special train with five cars arrived in Phoenix from Los Angeles on February 13, 1927. The purpose of the special train was to carry a company of fifty famous Player-Lasky players who were filming a western movie for Paramount Films.

The title of the picture they were filming was “Arizona Bound.” The director of this western motion picture was John Waters. His assistant director was Richard Blayton. The company motored along the Apache Trail to Fish Creek Canyon where they planned to film several takes of “Arizona Bound.” The film centered on the stagecoach days of early Arizona, back in the 1890’s.

Betty Jewel played the feminine lead while Gary Cooper, Jack Dougherty and Christian Frank interpreted the important male parts. The scenes are centered on a picturesque stagecoach and twenty-two head of horses negotiating Fish Creek Hill. The location managers couldn’t have picked a better site for filming based on the dramatic and scenic backdrop Fish Creek Canyon provided for the cameras, however, the area was quite remote. It was more than fifty miles from Phoenix.

The story, Arizona Bound, was by Paul Gangelin. The cameraman for the project was Charlie Schoenbaum, one of the best known cameramen on the coast. Schoenbaum was really impressed with the filming opportunities he found in this area. Betty Jewel was the only star brought from the coast for the filming. At the time Gary Cooper wasn’t a major star in Hollywood.

The crew motored in a large bus from the Adams Hotel and the Arizona Hotel to their filming site daily. The filming involved extremely long days for the crew under quite primitive conditions.

The story “Arizona Bound” was woven around the transportation of a particular gold shipment from New Mexico to Arizona in the early 1890’s. The entire film was built around Arizona life and scenes.

John Waters directed many of Zane Grey’s stories into motion pictures and they were very popular. Waters returned to Arizona to film other productions along the Apache Trail and was one of the leading directors in the moving picture industry in the late 1920’s. His success focused around new film techniques, new stars and innovations. One important attribute of John Water’s films was “on location” no matter where.

Gary Cooper appeared in this film and this was one of his first trips to Arizona for the purpose of filmmaking. Yes, Gary Cooper rode the Apache Trail (for any of you who were fans of this legendary actor.)

This film was followed by many more. Such films as “Lust For Gold” starring Glenn Ford, Ida Lupino, Gig Young, Chill Wills, and Edgar Buchanan. “The Mountain Road” starred James Stewart. There is quite a film history for the Apache Trail area. We have listed only a few of the films from along the Apache Trail. Just a few years ago a portion of “Jerry Mcquire” which starred Tom Cruise was filmed at Lost Dutchman State Park along the Apache Trail.
Posted by Apache Junction Public Library at 6:00 AM