William W. Linesba, a mine operator from the Prescott area, became very interested in the Superstition Mountain area in late 1937. From November 1939 through April 1940 Linesba employed several miners from Superior, Arizona in a mining operation on the southwestern corner of Bluff Springs Mountain in the Superstition Primitive Area, later called the Superstition Wilderness Area and a part of the Tonto National Forest. This mine became known as the Lost Dutchman Mine No. I. Actually these were old diggings when Linesba's crew reopened them. 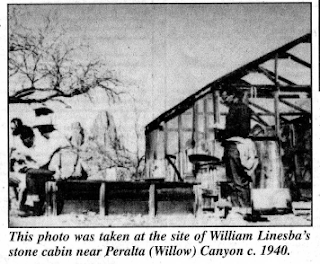 Linesba and his crew of miners staked out almost a square mile of mining claims in the area. Within this square mile Linesba believed the Lost Dutchman Mine was located. He was convinced these old diggings near the southwestern edge of Bluff Springs Mountain were Mexican in origin. Linesba had heard stories about Mexican prospectors in the area from old timers around Florence. He searched for the old diggings and located them. His development of these old diggings resulted in a small permanent camp a short distance from the shaft. The camp was located below Bluff Springs Mountain in a saddle between Bark Draw and Bluff Spring's Mountain Canyon.

When I was a young man my father took me by this old camp on several occasions. The first time I visited the camp I recalled seeing the wooden floors used for the tent cabins. I am not sure exactly what year this was, but it was in the late 1940s. There were four or five tent houses in the William's Camp. I was told the camp was named after Linesba's first name. Other sources have said the camp was named after a man that worked for Linesba named Charley Williams. Williams supposedly found a cache of gold bullion in the 1930s. As late as 1973 you could still find large pieces of the lumber used for these old tent house floors.

At the old prospect site there is still as very deep vertical shaft. The shaft is reported to exceed 120 feet in depth. Linesba had an excellent head frame and hoist system set up at the shaft. The waste dump exhibits considerable excavation while revealing no indication of minerals or profitable ore. This site certainly was not the Lost Dutchman Mine. These diggings left nothing but a scar on the natural beauty of the region. The shaft is not filled in to this day and is an extremely danger place to wander around.

William W. Linesba eventually built a small stone cabin at the entrance of Peralta (Willow) Canyon near a good source of water in 1939. After his death Linesba's wife lived in the cabin for several years.

I don't recall exactly the year the old Linesba Cabin was torn down, but I know it was still standing in 1959, the last year I worked for the Quarter Circle U Ranch.

Linesba didn't find the Dutchman's Lost Mine and like many others, he was very disappointed about his investment in the mine and the money other people had lost.

William W. Linesba died of natural causes in the Hotel La Posada in Holbrook, Arizona on Monday, June 10, 1941. According to the obituary, Linesba was a mining man from Prescott, but was well known around Holbrook because he spent time shipping Manganese ore from a mine in Long Valley near Prescott. His wife and daughter of Florence Junction survived him. Florence Junction is where his wife picked up her mail.

Linesba left his mark on the history of the Superstition Wilderness Area. His legacy will be remembered by all of those who recalled his Lost Dutchman Mine No. 1. This operation marked his legacy in the area near the base of Bluff Springs Mountain.
Posted by Megan at 1:00 AM