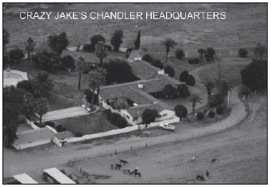 One of the most colorful and controversial characters to ever play a role on Oren Arnold’s Superstition Mountain stage was a man named Robert Simpson Jacob. “Crazy” Jake, the name he liked to be called maintained a camp off and on within the boundaries of the Superstition Wilderness Area east of First Water Trail Head about seven miles. His main camp was located in Squaw Box Canyon just off La Barge Canyon below Marsh Flats. He used this camp for many years between 1966- 1974. After 1974 he moved his camp to the top of Peter’s Mesa just above his camp in Squaw Box Canyon. Jake was known to maintain quite elaborate camps in the mountains. He often entertained his investors and the press.

First, let’s discuss his camp in Squaw Box Canyon. This camp was located among some very large boulders at the mouth of Squaw Box Canyon. One boulder was large enough to serve as a shelter and protect his mining equipment. There was enough room under the boulder for four or five cots. Jake had large tarps stretched from boulder to boulder making a large shaded area for a kitchen and a place to rest out of the sun. I visited this camp about 1972. Actually it was by accident I came up on the camp with a group of Boy Scouts. Jake immediately advised us from horseback that it was far too dangerous to camp around his area because of blasting and etc. I lead the scout troop on down the canyon about 500 yards. Jake invited my assistant and I to visit his camp once we had our camp set up. My scouting assistant declined the invitation, but I decided to walk up to his camp and see what it was all about. The first thing I noticed when I walked into camp was the crude stone corral they had constructed to keep their horses in. Jake had five or six men in camp when I visited. He introduced me to a couple men and told them we were camping just below their camp in La Barge and he didn’t want any blasting or target practicing going on until we left the next morning. Jake’s Camp consisted of sleeping, storage and kitchen areas all partially under a large boulder and tarps stretched between other boulders held up with large poles. Some of his men slept in small tents away from the main camp. Jake’s camp was quite elaborate when it came to camping facilities. They even had a packer coming in every other day bringing them supplies that included ice.

I visited “Crazy” Jake’s upper camp upon Peter’s Mesa for the first time in 1987. By then Jake had abandoned his lower camp. This site was also quite elaborate for a mountain camp. This camp included large cabin tents. He had a cook tent, and the rest of the tents were used for sleeping quarters for his workers. I looked at some of the holes he had his men dig. The holes were randomly dug into rock that had no mineral value at all. Most of the rock in this area was volcanic ash or basalt. One of the most interesting things about this Peter’s Mesa Camp was the fact Jake built a trail from down in Squaw Box Canyon up the side of Peter’s Mesa to his upper camp site. I was amazed at the work that went into this trail. Many years later Ron Feldman and I took a news crew over this trail on horseback. What a challenge that was? Even my old friend Bob Corbin rode along on this trip. An old cowboy outfitter named Bud Lane packed supplies over this trail to Jake during the summer months when he had a crew in the mountains. If Jake had investors, he always had a crew working in the mountains. Many people have wondered where he hid all money he talked people out of. I don’t think he hid the money. I really believe he spent a lot of it in the mountains. He was certainly a man with a golden tongue and could talk people out of their money.

If you worked for Jake in the mountains he usually took good care of you if he had good investors. Jake’s camps never lacked the proper supplies to keep going as long as Jake was the ramrod them. He also spent a lot of money on frivolous things such as cases of bottled whiskey from Canada that were labeled “Crazy” Jake’s Whiskey. Jake maintained a headquarters at the Trails End Ranch in Chandler located at the corner of Pecos and Alma School Roads. His headquarters was an elaborate ranch-style home with a downstairs bar and a walk-in Diebold safe. The interior of the house was quite ornate with beautiful and valuable oil paintings. Jake had the ideal setting to convince investors to invest in his rich mining operation in the Superstition Mountains. Jake had about thirty head of horses on the ranch when I first visited it in the early 1980’s. I later found out the horses belonged to Jess Shumway and that Jake had worked out a deal to use the horses in return for feeding them. He also did not own the ranch-style home he was living in.

Robert Simpson Jacob became a legend in his own lifetime while pursuing the money of the wealthy with one of the biggest and must ridiculous scams since territorial days in Arizona. Today, in Apache Junction, many old residents have “Jake Stories” to tell if you have the time to listen. He had many wealthy doctors and lawyers investing in his gold schemes. I am sure someday a book or maybe a film will be made about Robert Simpson Jacob’s adventures in the Superstition Mountains.
Posted by Apache Junction Public Library at 5:32 PM