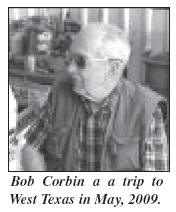 Robert K “Bob” Corbin acquired his interest in the Dutchman’s lost mine as a young man. He read an article about the mine in Life magazine when he was in the Navy. From that day on he wanted to visit the Superstition Mountains and look around.

He made his first trip into the mountains in the summer of 1957, departing from Tortilla Flat and hiking south through some really rugged country. When he and his friend finally returned to Tortilla Flat through Surprise Canyon they were completely beat. Bob remembers the water faucet at Tortilla Flat more than any of the terrain he walked through or any single item at the “Flats”. That day, he made a rule he would never go into the Superstition Mountains during the summer months and especially during the month of July. His blind determination to see the land of the Dutchman’s lost mine could have cost him his life that hot summer day.

Robert K. Corbin was born in Worthington, Indiana on November 17, 1928. After completing high school Bob joined the United States Navy in 1946. He completed his tour of duty with the Navy and returned to Indiana. While a freshman at Indiana University he wrote a theme for a class about the Dutchman’s lost mine. He worked his way through the Indiana Night Law School. One of Corbin’s reasons for moving to Arizona was his interest in lost mines and treasures. This research kindled in Corbin a keen interest for the Dutchman lost mine and the Superstition Mountains of Central Arizona. Bob, like many others, decided Arizona was a rapidly-growing region and his future lay in the desert.

Corbin’s first trips in the late fifties, after the almost disastrous trip south of Tortilla Flat, were into the vicinity of Weaver’s Needle. After a few trips into the area he became acquainted with some of the local prospectors. Corbin met Celeste Maria Jones and her prospecting party near the base of Weaver’s Needle in 1958. A somewhat cautious friendship developed between Corbin and Jones. Bob Corbin and Joe Robles, one of his friends, began grub staking Jones and her operation in 1959, mostly for the novelty of it rather than the expectation of any actual financial return. Corbin was fascinated with the prospectors, their stories, and the lore of the area. He ventured into the mountains every opportunity he had on the weekends. He wanted to further explore this mountainous wilderness and enjoy its beauty, peace, and solitude.

It may have been the possibility of finding something that drove Bob and was so important to him. Searching the Superstition Mountains for years gave him time to relax and think about the future. If he didn’t find the mine; but he had a great time looking for it.

As Attorney General of Arizona, he was respected as one of the best law enforcement officials in the American Southwest. Bob was extremely proud of the fact he is a board member of the National Rifle Association and also served as President of the association. Bob Corbin has served the public with total devotion to the fact “the law is the law.” For that reason he was one of the most respected public officials in Arizona history. Bob has received many local, state and national awards for his dedication to public service.

I first met Bob in 1980 when I invited him out to Apache Junction to talk to my class titled “Prospecting the Superstitions.” I don’t recall how this meeting came about, however we became friends. Bob and I rode in the Superstition Mountains for more than twenty years together.

We made several pack trips into the mountains to such places as the Reavis Ranch, Circlestone, Upper La Barge Box, Boulder Canyon, Horse Camp Mesa, Peter’s Mesa, Angel Springs, J.F. Ranch, Top of Superstition Mountain, and many other destinations within the Superstition Wilderness Area. Our trips included checking out many old time clues and stories about the Dutchman’s lost mine, however most of the clues did not produced any real results.

I am not sure we really cared; we just enjoyed the great outdoors and the seclusion the region offered.
What can I say about Bob Corbin? First and most importantly I can call him a friend, and he has never relinquished his love for the history and lore of Arizona and the Superstition Mountains. I have met many men in my life, but few as honest and straight as Bob Corbin. While Attorney General of Arizona he kept his cool in some of the most trying events in Arizona history. The most celebrated case is the U.S. Supreme Court case involving the Miranda.

Another case that comes to mind was the Don Bolles’ case. He was also involved in the impeachment trial of Arizona Governor Evan Mecham. Another interesting case was the prosecution of Robert Simpson Jacobs, known locally as “Crazy Jake”. Jacob claimed to possess the richest gold mine in the world somewhere in the Superstition Wilderness Area. Jacob was convicted of fraud; bilking people and corporations out of millions of dollars. The AG’s office estimated Jacob defrauded citizens of Arizona out of more than eight million dollars.

You might not agree with Bob Corbin’s conservative views; however his integrity as an honest politician was well known by Arizonians. He is a strong believer in the United States Constitution and the laws of this nation. Mr. Corbin sincerely believed the “Law was the law.” If he was wrong he would admit it.

What is Bob Corbin doing today? He retired in 1990 and has been enjoying retirement in his beautiful home near Prescott. He always dreamed of living in the cool pines when he retired. He enjoys prospecting around the Bradshaw Mountains. Life has been wonderful for Bob until recently when he lost his beloved wife Helen after forty-nine years of marriage, however he has three wonderful daughters to help him through this difficult time in his life.

Nobody ever totally readjust to such a lost, but Bob has had the courage to carry on under very difficult and emotional circumstances. You don’t see his pain visually, but you know it hurts him deeply. Bob is making a positive effort to readjust to life without his beloved Helen. When such tragedy strikes we must be able to move on and his beloved Helen would have wanted Bob to do so.

Bob Corbin is one of most interesting men I have ever known who actively searches for the Dutchman Lost Mine in the Superstition Wilderness Area. Over the years he has shared his time with Apache Junction on several occasions. He was Grand Marshal for the Lost Dutchman Day’s parade when he was Attorney General for Arizona. He has given talks for various community service organizations in Apache Junction over the years. He has participated in several community events during the past four decades.

Just recently (early May of this year) Bob Corbin accompanied me on a six hundred mile trip to West Texas to look for a lost gold mine with a mutual friend of ours from England. Peter Gardiner had told us about a lost gold mine in West Texas and off we went. Bob, at eighty years young, really enjoyed this fantastic adventure. We found no gold mine, but we found some wonderful new friends in West Texas.

If you are interested in reading more about the trip to West Texas you can find the article archived in Kollenborn’s Chronicles on-line. The article is title “Gold in West Texas.” 6/29/09.
Posted by Apache Junction Public Library at 3:49 PM