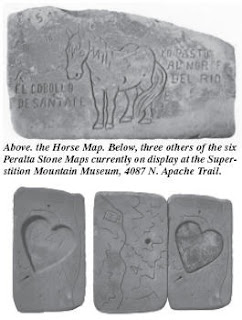 The topic of the Peralta Stone maps have been one of the most interesting subjects associated with the Superstition Mountain area. These four stone maps maps continue to mystify and confuse those who try to interpret them. The greatest amount confusion involving these maps is associated with their origin and whether they are genuine or not.

The origin of these stone maps is dubious at best and still causes heated discussions among historians and treasure hunters. Stories about the stone maps vary from storyteller to storyteller as to their authenticity. Many periodicals have been written about the Peralta Stone Maps over the past three decades without any conclusive or sound evidence pointing to their origin or meaning.

Old “Doc” Ludwig G. Roscrans told me he saw the stone maps about three weeks after they were discovered near Florence Junction in 1949. He said he talked to the Mexican bracero (migrant worker) who had discovered the maps originally and then sold them to a tourist from Oregon.

Today there are many versions of this story. Bob Ward took me to a location east of Black Point, pointed to a hole and said that was were the stone maps were recovered. Bob arrived in the area about 1958. The strongest oral evidence suggests the maps were discovered near Black Point. However, all of this information is based on subjective testimony.

The stone maps are an excellent piece of art in many respects. It is obvious whoever carved the stone maps was familiar with carving in stone. There are those who claim the stone maps are made of material that can not be found in this area. The stone maps, according to some, are made out of soft sandstone more conducive to the Colorado Plateau region in northeastern Arizona than the desert areas around the Superstition Wilderness Area. However, there are some very soft pseudo-sandstone rock near Oak Flats between Superior and Miami that might have yielded the material for these maps.

Robert G. Garman knew the Mexican bracero who was working for John Hart building a fence near the north bank of Queen Creek east of the highway (U.S. Highway 60-70), who made the original discovery. The fence was aligned east to west near Black Point. The bracero, while setting post for this fence, noticed an unusually large flat stone in the side of his post hole. He worked the stone lose and found it had cryptic writing on it. He also recognized a Spanish word. He also noticed the rock was covered with Indian petroglyphs and some Spanish markings. Not understanding the significance of his discovery the Bracero hauled the stone to Florence Junction, a few miles away. He planned on selling the stone to a passing tourist for a few dollars.

He arrived at Florence Junction after walking and lugging the flat stone some three miles. He borrowed a water hose at the service station and washed the stone off, carefully preparing it for a curious tourist. He found such a person in Robert G. Tummilson of Portland, Oregon. Tummilson, a retired police officer, examined the rock and decided a fair price would be $10.00. This was almost a week’s wages for the Mexican laborer. Tummilson was now the proud owner of a stone with some cryptic writing on it. After this interesting purchase Tummilson continued his journey on to Phoenix to visit his brother. Once at his brother’s house Tummilson decided to wash the rock thoroughly and re-examine it. Tummilson and his brother immediately recognized this was no ordinary petroglyph of Native American origin, but some kind of coded map in Spanish.

The two brothers were convinced this stone slab was Spanish or Mexican in origin. The so-called Peralta Stone Maps have changed hands several times over the past fifty years. These mysterious slabs of rock have been called frauds by historians.

There are claims the stone maps were found on the Gila River near Dos Lomas. If indeed these stone maps were found by the Tummilson brothers as they claimed and if a Mexican bracero actually found them, why wasn’t the discovery better documented with more photographs, notes and field sketches? Tummilson was a retired police officer trained in accurate note taking and crime scene preservation. The lack of evidential commitment at the discovery site of the stone slabs seriously damages the authenticity of the discovery. There is a counter argument to evidential commitment at the site. It could be, according to Garman and others, Tummilson wanted to control all information disseminated about the stone maps. This is not a sound argument in itself because Tummilson had no idea what he had discovered. He did not know if they were authentic or fraudulent.

Not all of the foregoing information was supplied by Robert L. Garman. Some of the information came from Ludwig G. Rosecrans and others interested in the stone maps. Doc Rosecrans had a copy of the photograph of the maps on Tummilson’s car given to him by Tummilson himself. Tummilson died and the stone maps eventually ally changed hands. The stones emerged again in the early 1960s. There were very few people who knew about the stone maps existence prior to1962.

Clarence O. Mitchell met Tumilson’s widow and was able to convince her he could decipher the stone maps. Once Mitchell had the stone maps in his possession he decided from Kollenborn, A-4 to form a stock investment corporation based on solving this mystery. Mitchell and his wife organized the M.O.E.L. Corp. in Nevada and began a stock selling campaign among their friends and close associates.

The M.O.E.L. Corp. soon flourished when Mitchell convinced investors he needed money to search for the treasure indicated by the stone maps. According to documents Mitchell and his wife raised more than $70,000 over a two-year period. They were so successful in Nevada they decided to branch out into Arizona.
Next week, Part 2.

Be sure to visit the Superstition Mountain Museum and see the Peralta Stones for yourself at 4087 N. Apache Trail State Rt. 88, Apache Junction. For more information call (480) 983-4888
Posted by Apache Junction Public Library at 3:44 PM