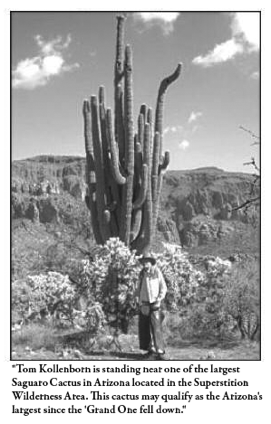 A large saguaro cactus formerly located near Horseshoe Lake was believed to be the largest in Arizona. This forty-six foot giant crashed and burned recently. This giant was known as the “Grand One.” According to Todd Willard, Tonto National Forest wildlife biologist, this giant cactus fell in the summer of 2007, some two years after it was scorched in the Cave Creek Complex Fire. Forest service biologists have varying theories about what killed the “Grand One.” It could have been fire, wind, disease, old age, lightning or a combination of these factors. The lower arms of the cactus were singed during the Cave Creek Complex Fire. The cactus was estimated to be between 150 and 200 years old. This old cactus appeared to have survived the fire with little damage.

Ken Morrow of Patagonia, state coordinator of the Arizona Register of Big Trees, said that a fifty-four foot saguaro in the Superstition Wilderness Area east of Apache Junction has now been nominated as the state’s tallest cactus.

What may now be Arizona’s largest saguaro cactus may be located in the Superstition Wilderness Area. I am guessing, but the cactus I am thinking about would be over forty feet. I believe it has some forty-two arms and the girth of main trunk is about sixteen feet. This giant cactus is located about six miles from Don Camp or the Peralta trail head. I have been riding by this giant saguaro since 1955. I even visited the site in the late 1940’s. Over all these years the old cactus has changed very little. I do remember in the mid 1980s we counted the arms on the cactus and if I recalled correctly it had forty-two arms that were a foot or more long.

The approximate GPS coordinates of this cactus is W 111* 20.140” N 33* 26.060”. The cactus is located just off the Bluff Springs Mountain trail shortly after leaving the canyon going north toward La Barge Canyon. The cactus is located on the left hand side of the trail if you are walking northeast. If you are planning a hike into the area I would wait until next fall for cooler weather.

The saguaro cactus is the largest cactus specie in Arizona. Its’ blossoms are the state flower. The cactus is often known as the sentinel of the desert. The Native Americans use the saguaro for food and utilitarian purposes. The long rib skeleton can be used to build shelter, fencing and to make harvesting tools. The fruit of the saguaro produces a juice that, when fermented, becomes an important alcoholic drink for Native American. The drink is often used in religious ceremonies and other occasions.

Actually the saguaro is a very rare plant native only to the Sonoran Desert of Arizona, California and northern Mexico. Residents of Arizona think they are abundant because they see them so often along highways. Thousands of saguaros died from exposure to frost in recent years during extra cold winters on the desert. Large saguaros don’t have much of a life expectancy because of birds, insects, fire, lightning, and humans. Humans are probably the most hazardous animal to saguaros. They often shoot them for target practice and push them over to develop land.

Oh yes, there are state laws that protect saguaros, however there are few people to enforce these laws. A drive out to Needle Vista on the Apache Trail and then a short walk to the end of the concrete sidewalk or trail will demonstrate this point. The most ignorant of our species continue to shoot saguaros for target practice. This small saguaro at the end of the trail demonstrates one the most common causes that destroy these magnificent plants. The giant saguaro east of Bluff Springs Mountain will probably survive for a couple more decades before lightning, wind or fire will bring it crashing down to the earth. For the time being this plant probably stands as one of tallest saguaros in Arizona.

I am not an authority on the saguaro cactus, therefore my estimated height could be inaccurate. I computed the height of this cactus based on my height and distance from the cactus. Credit to Arizona Republic, Peter Corbett, for his excellent article on “The End of a ‘Grand One.”
Posted by Apache Junction Public Library at 3:41 PM