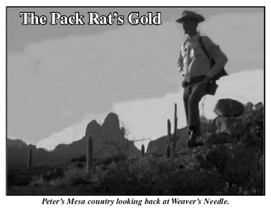 Several people over the years have asked me to tell stories I’ve heard in the mountains around campfires. This will be one of those stories.

I recall the day as being warm, but not really hot. We took our time because Bill was seventy-eight, but in very good shape. My dad was still in quite good shape at fiftysix years of age. Bill Cage wanted to make it to Charlebois Spring by the end of our first day. We had departed Barkley’s First Water Ranch about 7 a.m. that morning. We arrived at Charlebois Spring about 3 p.m. and set camp for the night.

This was a very exciting time for me to be with my father and old Bill Cage. My mind was on finding a lost mine so rich we would never have to worry again.

As we sat around the camp- fire that evening at Charlebois, I listened while Bill Cage told my dad the story of the “Pack Rat’s Gold.” This story has some validity, but it would have been just another gold story if it hadn’t been for the man who was telling it. Bill Cage had lived most of his life in Arizona. He apprenticed as a blacksmith in Phoenix in the late 1880’s. He had heard many of tales about mineral riches in the mountains around the Salt River Valley. Most, he said, were pure fiction, but others had some merit.
“George,” he said that night in the flickering light of our campfire, “Nearly thirty years ago, to this day, an interesting thing happened to my partner and I on Peter’s Mesa just above us here.”

Cage continued talking about camping somewhere immediately below a bee hive in Peter’s Canyon. He talked about how the night was very cold. “There was a roaring campfire going up against some rocks so it would reflect the heat toward us. This heat disturbed a Pack rat living nearby.

The rat started packing up his abode then searched for a better place to live or at least better suited for his lifestyle. Soon the pack rat had a trail of debris from his old home to his new home. I kept talking and watching the Pack rat with the problem of moving his residences.

“It was at this point old “Monument” Smith saw something that caught his eye. Smith picked up a small twig and started sorting through the Pack rat’s trail of debris. It wasn’t long before Smith came up with what he thought he had observed.

“Look here Cage,” he called out calmly. “Look at this bonanza ore this damn pack rat had in his nest. Where did the gold come from?”

Bill Cage examined the small pieces of gold ore and said it was very rich. Cage knew the ore was definitely bonanza quality by its richness. Cage also recognized something else. There were small pieces of rotten leather. The kind of leather you would find in old pouches, definitely not in saddlebags. Saddlebag leather is much heavier than pouch leather.

In the flickering embers of our fire “Monument” Smith verified the story old Bill Cage told. Stories like these have attracted gold seekers to Peter’s Mesa for the past century.

This story kept “Monument” Smith searching for gold on Peter’s Mesa for another decade. Bill Cage always figured some prospector lost his gold pouch and the pack rat found it. When old “Monument Smith” passed away he had known one thing for sure. He had found rich gold ore in the Superstition Mountains of Arizona thanks to a pack rat. Old Bill Cage also was convinced there was gold in the Peter’s Mesa area.

A lot of men have searched for gold on Peter’s Mesa over the past eighty years and many of them believe there is a rich gold mine to be located there. Geologically Peter’s Mesa might have more promise than other areas of the Superstition Wilderness Area. Ironically only traces of gold have ever been found on Peter’s Mesa. These traces are so minute it would not be profitable to mine them.

That trip, almost 60 years years ago, reminds me of the many wonderful adventures I have been so fortunate to enjoy. I never put a lot of faith in this story because of the circumstances surrounding it. Old “Monument” Smith might have planted the gold placer shortly before he called our attention to it. Who knows for sure? “Monument” Smith wanted to be remembered for something to do with the Superstition Mountains.

Several years ago I was told there were a couple of old timers who went by the name of “Monument” Smith. If this were true it would only further complicate this story. Believe me every story has its way of bending the truth and facts. Understanding the objective and subjective information is very important in finding the truth.

Always remember; just because somebody says something, even if you respect them as an authority, it doesn’t mean it’s true. That said, all lost gold stories should be taken with a “grain of salt.”
Posted by Apache Junction Public Library at 3:38 PM