Wild Fire Season in the Desert 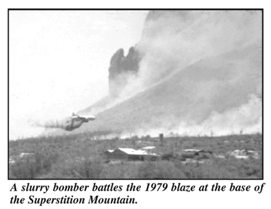 The beauty of the Sonoran Desert after a wet spring is fabulous. The winter has been witness to quite a bit of precipitation. This tremendous growth of weeds presents a great fire danger for the late spring and summer months. A lot of the dead, older growth provides fuel for the slightest spark whether accidental or natural. A dry desert is often marred with dangerous wildfires in the late spring and the early summer months prior to the monsoons.

The fire danger increases as late spring and early summer temperatures increase. The wildfire season has increased dramatically as more and more people move to the arid deserts of the American Southwest. Many of these new residents don’t realize the extreme danger of a dry desert under the extreme high temperatures of summer. This desert tinder can be as volatile as gasoline.

Most wildfires result from one of two things; lightning or human carelessness. Lightning usually occurs during the July monsoons, and most fires prior to the monsoons are human caused. It is usually a carelessly tossed cigarette or an abandoned campfire that causes these fires, and could cost you your home and your life.

As we move into summer, families are beginning their summer vacations and outdoor activities. These activities include backyard cookouts, camping, and other activities. Any of these enjoyable activities can lead to disaster if we are careless with fire.

I have witnessed many major wildfires in our area during the past 55 years. The first real wildfire I recall occurred in July, 1949. This fire raged out of control east of Reavis Ranch for several days before it was brought under control. Another wild fire broke out west of Roosevelt Lake in the Pinyon Mountain area in 1959, and burned several thousand acres of the Tonto
National Forest before it was contained. Lightning caused those fires.

A fire broke out south of the Reavis Ranch in 1966, destroying much of the Ponderosa pine forest in the area. This fire was known as the Iron Mountain burn and was attributed to a campfire. The forest service planted drought resistant grasses in the area to prevent soil erosion. This grass has become the climax vegetation in the area today.

A large wildfire raged through Needle Canyon in 1969 destroying several thousand acres of desert landscape. An abandoned campfire was the likely cause of this fire, which eventually burned itself out because of the inaccessibility to the area.

I witnessed and photographed one of the most dramatic wildfires on the slopes of Superstition Mountain in July of 1979. This fire raged across the slopes of Superstition Mountain with a fifty foot wall of flame engulfing everything in its path. This fire was caused when a high wind blew over a charcoal grill in somebody’s yard near the base of the mountain. One careless neighbor endangered hundreds of lives and millions of dollars of property as the fire spread over the mountain within an hour. The smoke was so thick Superstition Mountain could not be seen from State Route 88 (Apache Trail). If it had not been for slurry bombers many homes would have been lost in this fire and lives could have hung in the balance.

On July 4, 1983, another major fire raged on the eastern side of Superstition Mountain destroying several thousand acres. This fire eventually burned its self out. Needle Canyon was struck with another wildfire in March of 1984. This fire burned up the northeastern side of Bluff Springs Mountain and eventually also burned itself out. Abandoned campfires most likely caused these fires.

There was a large wildfire in the area of the Massacre Grounds and along the northwestern slopes of Superstition Mountain in April of 1984. This fire was contained and in some areas burned its self out. Several other man-made fires occurred in the wilderness or around Superstition Mountain between 1984 and1994.

The next big fire to strike the region was the Geronimo blaze near the Gold Canyon development area. This fire started around June 11, 1995 and was fought for three days. A hundred and twenty fire- fighters eventually brought this blaze under control before lives or property was lost. Twenty-three hundred acres were destroyed by the fire and it threatened several homes near Gold Canyon. This particular fire produced huge columns of smoke that could be seen from Phoenix skyscrapers.

This historical accounting of wildfire in our area gives you some idea of what a potential fire hazard the desert can be between late April and mid July. Precipitation is often a double-edged sword. Rain always brings relief to a dry desert region reducing fire danger, but it always produced an abundant growth of brush that can create more fuel and cause more fires. Precipitation also causes severe erosion in areas that have been burned and denuded of vegetation. This in turn destroys the watershed that is so crucial to water conservation in an arid place like Arizona.

As the dry season approaches, the fire danger will continue to escalate bringing dangerous conditions to our desert. There is plenty of tinder and dead-fall to burn on the desert. Once the high temperatures arrive and dry out the tinder it is extremely volatile.

Your care with fire and open flames at all times is extremely important and will protect us all. Smoking should be confined to automobiles or buildings during extreme fire conditions. Your caution with fire protects us all and the firefighters who fight these desert fires.

We can help by having reasonable firebreak around our home, especially if we live on a large lot containing a lot of dry tinder. I would like to encourage everyone to be extremely careful with matches, cigarettes, outdoor cooking, power tools, and any other use of open flames or sparks. Fire safety in the desert starts at home and should be practiced at all times. For more information about fire safety; call the Apache Junction Fire Department at 480.982-4440.
Posted by Apache Junction Public Library at 1:50 PM