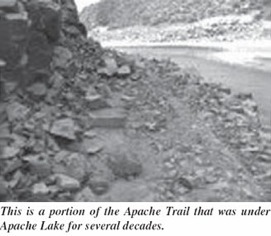 Several years ago I was helping a friend who worked for the Page Land and Cattle Company gather a few cows on the old Weeks’ cow outfit west of the Apache Trail in the Goldfield Mountains.

We were working near the old Government Well Highway Yard on the west side of the road. I was moving four or five cows along an old abandoned section of the Apache Trail when I spotted an old concrete pillar in a thicket of Broombush. The post was about four feet high, triangular in shape, made of concrete and had the numbers “23” and “37” engraved on it.

This discovery was made in the summer of 1960. I left the old marker as I found it. 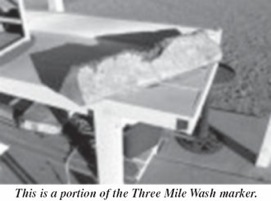 I returned to the site during the winter of 1973. At the time I was teaching a class, “Prospecting the Superstitions,” for the Apache Junction Community School. I was absolutely amazed to find the old concrete mile post marker still intact and undisturbed. The mile post marker had stood for 66 years when I revisited it in 1973.

I had totally forgotten about the old mile post by the spring of 1990. It was by accident I came across it again while photographing the Goldfield Mountain one evening. Again I was surprised it had survived so long.

It was at this time I decided something should be done to protect this old mile marker from vandalism or destruction. I contacted the Tonto National Forest district ranger who eventually arranged for the removal of the mile post marker and the placing of it in the Superstition Mountain Museum at Goldfield Ghost Town in 1991.

My friend and close associate, Greg Davis, brought me an article about the Apache Trail. The mile post was mentioned in this article, The Nile of America, and carefully identifies this particular concrete mile post. The article was published March 21, 1908. The following is quoted directly from the article:

“About a mile from Mesa the government road begins, and one of the first things noticed was the neat cement mile and half mile posts. Each mile post gives the distance from Mesa to the dam, and the observant teachers soon made up their minds to commit to memory all the combinations of sixty that can be made by using two numbers at a time, 0-60, 14-45, and ’30 all’ were correctly anticipated, and each found the figures corresponding to the mile post of his life, though not all in the same half day. At the eight mile post Desert Wells is past, where Mesa and Roosevelt stages change horses.”
The article continues, “Gradually swerving toward the north, at twenty miles the foot hills are reached and soon the beauties of a thoroughly constructed mountain road are appreciated.

Passing the ranch (Weeks’ Station) where water is sold at ‘ten cents a span,’ and the deserted mines at Goldfields in the corner of Pinal County, we returned to Maricopa County and stop for dinner at Government Well, near the 23 mile post. This also was a changing station for the stage and here you could change a ten dollar bill. Only one family lives here and neighbors are not within call, although three or four miles south at the foot of Superstition range can plainly be seen the camp and gold mine of two Scandinavians who are said never to allow a visitor to set foot on their claims.”

Today the named sites along the Apache Trail are difficult to recognize. Old Government Well is located opposite the Needle Vista Point and the old mine mentioned as belonging to two Scandinavians, Silverlocke and Goldleaf, can still be found if one searches the slopes of Superstition Mountain southeast of First Water Road.

This interesting article pointed directly to this old concrete road marker that now resides in the Superstition Mountain Museum 3.8 miles northeast of Apache Junction on the Apache Trail.

When they lowered the waters of Apache Lake this Spring (2007) another road marker (Three Mile Wash marker) was found along the old Apache Trail roadbed. Only a portion of this marker was saved and returned to the forest service for preservation.

These markers where placed along the Apache Trail every mile between Mesa and Roosevelt Dam. Only a few survive today. The most amazing one to survive was the Government Well marker. It remained undisturbed for more than eighty years.
Posted by Apache Junction Public Library at 9:48 AM